The Music of Giving Back 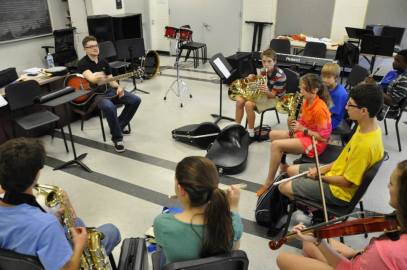 As summer draws to a close, it’s nice to remember that education is a 12-month-proposition, and that good teaching and good parenting are infinite.

Brian Biederman, 24, a middle school music teacher in Nashville, Tenn., fulfilled his lifetime dream of starting a music camp this summer. The Littlestone Summer Music Academy brought together 23 seventh through twelfth graders from diverse backgrounds to make music together.

As a youngster, Brian discovered his own niche when he attended music camp for the first time when he was 11-years-old.  He later worked at music camp for several summers, and formed lifetime friendships as he honed his musical talent.

“My dad said that camp for me was what I did in between school.”

“I attended the same camp as my dad,” he recalled. “I didn’t want to go to band camp at first, but my dad told me to try it for two weeks. Within three days, I wanted to extend my stay for two weeks. I ended up staying four weeks.  I knew immediately that I had to be part of the music camp community one day –as a patron, participant or to start my own camp.”

About 10 years ago, Brian, a 2010 graduate of Vanderbilt University in Nashville who holds a master’s degree from Vanderbilt’s Peabody School of Education, began planning how he would start his own music camp.

This year his dream came to fruition.

Brian comes from a family tradition of not only music, but also of community service.  His parents, Debbie and Mitchell Biederman of Commack, N.Y., are co-presidents of Helping Hands, a Long Island based charity that provides essentials to struggling families. With the advice and support of his parents, Brian created an educational non-profit organization.

“I contacted everyone I knew,” Brian recalled. “I found a private school — Montgomery Bell Academy — which agreed to let me hold the camp there.”

Brian kept cutting the tuition until he got 23 students to sign up.  He also made special arrangements for those who couldn’t afford to pay, and asked friends and professors from the Vanderbilt community for donations to help pay the staff.

“I wanted to let anyone come who wanted to,” he said. “I wanted to provide an opportunity for young people who don’t feel comfortable in a school environment. And I wanted to create a community where kids were comfortable and confident in looking at and playing music.”

Brian said he endeavored to blur the lines to have a mix of kids from diverse ethnic and socio-economic levels making music together.

“Let’s all make music together; it’s not where you come from,” he said. “Music is bigger than all of us.”

The finale of the summer season was a performance by Littlestone’s Festival Choir. Brian said the concert celebrated the diverse cultures of the students, and all students and staff participated.

For next year, Brian is looking to recruit more students, bring in guest artists, and raise money for more scholarships for students who would otherwise be unable to attend.  He also hopes to start a community choir in Nashville.