Presidents’ Day always makes me remember my maternal grandfather, who encouraged my brother and me to learn the names of all the US presidents

and vice presidents when we were still in the early grades. When we got together each week, we would play quiz show, mimicking the popular TV shows of that era. He would give us our assignment the week before and then reward us with pocket change for our correct answers the following week. He also had us learn each of the states and their capitals, as well as difficult spelling words.

My grandfather, who came to this country from Russia at age six, had to leave school at 14 to work as an errand boy to help his family of 10. But he knew the importance of learning. He later secured a plum position at the Post Office and courted and married my grandmother, who was one of 12 children born to immigrants.

My grandmother had graduated from high school, which she attended at night – something that was unusual for her day and station. My grandparents later ran a drug store with a soda fountain and put my mother, their only daughter, through college. When my mother graduated from New York University in 1943, she enlisted in the military after seeing a film about the Nazis. A generation later, my brother and I both received advanced degrees.

incredible success. Despite being born into poverty, her grandmother taught her to read when she was three-years-old. Later, when she went to live with her father as a teenager, he made education a priority.

Traditionally, public education in the United States was considered the passport that would level the playing field for the poor and disadvantaged. But an article in last week’s New York Times reported that several research studies indicate that while the racial gap has been shrinking, there is a widening achievement gap between affluent and poor students that is threatening to weaken education’s equalizing effects.

Researchers aren’t certain why, but some hypothesize that affluent children may perform better because their parents spend more time and money in providing them with enriching experiences, such as tutoring, music lessons, and literacy activities. Additionally, they appear to be more involved in their children’s schools. The recession likely has exacerbated this disparity.

But James J. Heckman, an economist at the University of Chicago, contends that parenting counts as much or more than income in developing a child’s ability to learn and succeed in school.

“Early life conditions and how children are stimulated play a very important role,” he said. “The danger is we will revert back to the mindset of the war on poverty, when poverty was just a matter of income, and giving families more would improve the prospects of their children. If people conclude that, it’s a mistake.”

One young person who still believes in the power of education to be the great equalizer is Samantha Garvey, the 18-year-old Brentwood, L.I., high school senior who in January was named a semi-finalist in the Intel Science

Competition while her family was living in a homeless shelter. She is president of her school’s chapter of the National Honor Society, and has a 3.9 grade point average. Her amazing story so captivated the public that Suffolk County Executive Steve Bellone arranged for her family to move into a rent-subsidized home.

“My family’s setbacks are a source of motivation. I want to get my family ahead, which is why I do well in school,” Samantha told Newsday.

“My daughter is a blessing,” her mother, Olga Garvey Coreas, an immigrant from El Salvador, told the Huffington Post’s Latino Voices. “I never tire of thanking God for giving her the talent she has. She lives dedicated to her studies — nothing stops her.”

She added that parents must be vigilant in encouraging and supporting their children’s education. She pointed out that her husband, Leo, worked nights and that she worked days.

“The fact was that we never left them alone; we were always there to help them with their homework,” she said. “I believe that good communication is the basis for guiding our children.”

As we observe Presidents’ Day, let’s remember the promise and the possibilities of our country. We must ensure that public education continues to be the great equalizer. But that requires a team. We need more parents like Samantha Garvey’s, who encouraged her to learn despite the odds — enabling their daughter to achieve the unimaginable. We need more teachers like the ones in the Brentwood Public Schools, who embraced and encouraged Samantha, enabling her to shine. Samantha, of course, deserves credit for internalizing her parents’ values and grasping the opportunities her school offered.

There is no substitute for active and involved parents partnering with caring public schools. They are still our country’s best hope for enabling young people to become all they are capable of being.

A Plan to End Bullying and Make Schools Kinder and Gentler

A plan that would virtually end school bullying and make school discipline kinder, gentler and more meaningful is being proposed for schools throughout the country.

The man behind this revolutionary concept is Dr. Robert Goldman, a Long Island psychologist/lawyer.

He is intent on changing the culture of schools based on lessons found in his book, No Room for Vengeance, and his work with the Suffolk County Probation Department.

Goldman’s book, co-authored with Victoria Ruvolo, tells the true story of an incident that took place on the Long Island Expressway in November 2004. A teenager tossed a 20-pound frozen turkey out the rear window of the car he was riding in and it broke the windshield of an oncoming car, hitting and nearly killing Ruvolo, its driver. But instead of going to prison for up to 25 years, the offender, Ryan Cushing, 18, was allowed to plead guilty to a reduced charge of second-degree assault at the insistence of Ms. Ruvolo.

As a result of Ruvolo’s compassion, Goldman developed a program of repentance for juveniles, one believed to be the first in the country.

After Cushing entered his plea and was leaving the courtroom — knowing he would be sentenced to only six months in jail, five years probation and one year of community service — he stopped in front of Ruvolo who was standing at the end of a row and hugged her. The two cried openly.

“I’m so thankful that you are doing well,” he whispered to Ruvolo, whose face had to be rebuilt using metal plates and screws in a 10-hour operation.

“You’re such a wonderful person,” he continued, sobbing uncontrollably as others in the courtroom choked back tears. “Never did I intend to hurt anyone, especially someone as special as you. I prayed for you every night; I never meant this to happen.”

“It’s OK, it’s OK,” Ruvolo told him. “I am going to be watching over you now. Just do good with your life.”

Inspired by her compassion and challenge to create a venue where Ryan could do something good with his life, Goldman developed a program called TASTE, an acronym that stands for Thinking errors, Anger management, Social skills and Talking Empathy. 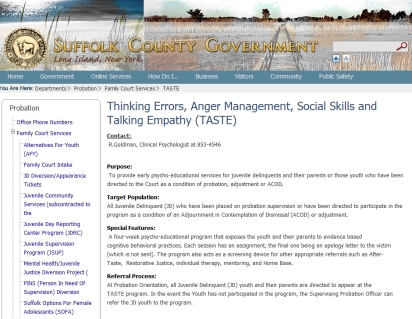 The program in Suffolk County’s juvenile justice program offers young people a chance to apologize to their victim in writing or in person. Goldman, who is now the supervising psychologist in the Probation Department, said that Ryan’s community service required him to address youngsters in the TASTE program. It is for youngsters 12 to 15-years-old who have pleaded guilty to a variety of crimes (including shoplifting, criminal trespass, assault, graffiti and aggravated harassment) and have been sentenced to probation or had their cases adjourned in contemplation of dismissal. Goldman noted that Ryan continued speaking to groups with Ruvolo well after his one-year of community service ended.

The hour-long probation programs — which can range from four to 16 sessions, depending on the needs of each youngster — also involve the participation of the youth’s parents. Goldman and his colleagues at the Probation Department run TASTE, which focuses on teaching the juveniles about self-control.

The key to the program is to have youngsters stop and think of the long-term consequences of their actions before they act.

Now Dr. Goldman wants to bring this program to schools as an alternative to suspension.

“Rather than throwing them out of school, thereby rewarding them for their behavior, I would hold them accountable by putting them through this program and having them make peace with their victim — especially in the case of bullying,” Goldman explained.

This is an intriguing program and one certainly worth considering. As the Hearing Officer in Superintendent’s Disciplinary Hearings for more than a decade, I often felt hamstrung in meting out consequences. New York State law allows only for suspension as a punishment. Counseling, alternative behavior modification programs, and creative solutions can only be recommended, not mandated.

Goldman also wants to give principals more authority — rather than automatically requesting a Superintendent’s Hearing — to impose more than a five-day suspension. He notes that implementing TASTE in schools would give kids — particularly those involved with drugs and similar offenses — along with their parents and school personnel the opportunity to explore why the offense occurred, how the school was impacted, what such behavior does to the community.

“Let the children hear the consequences of their behavior on the school so they can understand,” Dr. Goldman said. “Let them become part of the program, part of the solution. Let them mentor others on the dangers of drugs.”

In addition, Goldman is currently developing a curriculum, based on the TASTE principles that he hopes to implement throughout the country, starting with New York. He says it fulfills the requirements of The Dignity for All Students Act, which will take effect in New York State in July. It was enacted to protect students in public schools from discrimination and harassment. New York joins 11 states, which have already passed similar legislation, including California, Connecticut, Iowa, Maine, Maryland, Massachusetts, Minnesota, New Jersey, Vermont, Washington and Wisconsin.

The Dignity Act protects against all forms of harassment, especially those based on race, color, weight, national origin, ethnicity, religion, disability, sexual orientation, gender or sex. What’s notable about this legislation is that it amends state education law to require schools to incorporate diversity and discrimination awareness and sensitivity training into lessons on civility, citizenship, and character education. Additionally, schools are also required to develop effective responses to harassment and bullying, and to implement strategies to prevent these behaviors.