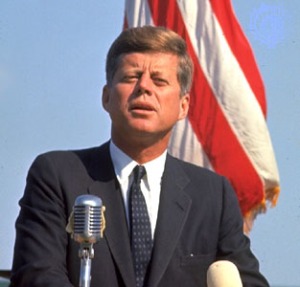 An article that I read yesterday on Huffington Post alerted me to the fact that the JFK Memorial Library is soliciting stories from people of how President Kennedy inspired them. In honor of the 50th anniversary of his assassination, “An Idea Lives On” website will feature people from all walks of life talking about the influence Kennedy had on them. The name is based on a 1963 quote from JFK, when he said: “A man may die, nations may rise and fall, but an idea lives on.”

President Kennedy inspired me to read daily newspapers, watch the news on TV every evening, and become a fan of Meet the Press at age 13.  It was easy to ace the weekly current events quizzes in junior high school. Kids today may be obsessed with the Kardashians. My friends and I were smitten with the Kennedy family.  We kept scrapbooks, followed their every move, and couldn’t get enough of our handsome president, his beautiful wife Jackie, and their children, Caroline and John John.

But in becoming obsessed with the Kennedys, we not only followed their fashion and lifestyle, we learned about government and politics. I learned the name of every cabinet member he appointed, and consequently knew each cabinet department, and what it did.  I learned about the Bay of Pigs, the Cuban Missile Crisis, the Peace Corps, James Meredith entering the University of Mississippi, and countless other happenings. It was all fascinating to me and inspired me to engage in school and community service.

When he was brutally assassinated on that beautiful November day, it was as if the wind was knocked out of our generation. We would never be so innocent, so idealistic, and so optimistic again. But his legacy continued to teach us about our country. We had a peaceful transition of power.  We learned about the Constitution’s provisions for presidential succession as we watched Judge Sarah Hughes administer the oath to LBJ with Mrs. Kennedy standing by.

My fascination with government and politics continued. I majored in political science in college, got a masters degree in teaching, and became a high school American History and Government teacher.

Profiles in Courage is a book that I read when I was in high school, and it was one that I had my students read. Of all of President Kennedy’s legacies, I believe that this book is the one that is most sorely needed today. Kennedy writes about the courage of elected officials to do what they believe is right even when it meant going against public opinion, their constituents, and political action committees.

“In whatever arena of life one may meet the challenge of courage, whatever may be the sacrifices he faces if he follows his conscience – the loss of his friends, his fortune, his contentment, even the esteem of his fellow men – each man must decide for himself the course he will follow. The stories of past courage can define that ingredient – they can teach, they can offer hope, they can provide inspiration. But they cannot supply courage itself. For this each man must look into his own soul.”

What more fitting tribute could there be to President Kennedy than for our elected leaders to heed his call on this the 50th anniversary of his death? May each find it within him/herself to find that courage. In so doing, they can continue to make President Kennedy’s memory a blessing, and entrust the survival of our democracy.

Meryl Ain is the coauthor of The Living Memories Project, to be published in March 2014 by Little Miami Publishing Company. It demonstrates how grief can be transformed into positive action and living legacies. Follow on Twitter: @LivMemoriesProj