Who Cares About Suburban Public Schools?

Syracuse Mayor Stephanie Miner introduced Cuomo by citing a Siena Poll that found 56 percent of New Yorkers believe the state is going in the right direction.

and an (teacher) evaluation system. We just did that in New York.”

“Gov. Cuomo has outlined the blueprint for prosperity in New York State, and I’m proud to be here,” she said. “But the governor didn’t mention the need to reform the state aid formula [for public schools]. One of the reasons I’m running as a mother of a fourth grader is to change that. We give the state more tax dollars than we get back. I’m here to represent Long Island and the educational needs of Long Island, which are completely distinct from New York City or upstate. Long Island can no longer continue to be a cash cow for the rest of the state.”

Fleming said she would like to change the state aid formula “so it doesn’t punish people who pay high property taxes but don’t have much disposable income. We need to reduce tax assessments for purposes of the formula. When aid to education is reduced, it shifts the burden to the taxpayer and hurts the local economy.”

Lawrence C. Levy, executive dean of the National Center for Suburban Studies at Hofstra University in Hempstead, N.Y., was at both the Republican and Democratic conventions and we chatted about how neither party is currently talking about addressing the needs of suburban schools.

“If the Republicans and Democrats were to score points with swing voters in the suburbs, they should start talking about what they can do for suburban schools,” Levy said. “Both parties are assuming it’s still the 60’s or 70’s when suburban schools didn’t need help. It’s one thing to leave the content of curriculum to the states, but it’s another to leave the entire burden of funding. The suburbs need a lot more help and only the federal government has deep pockets.”

Characterizing the 2012 election as one of the closest in recent history, on Tuesday Independent Pollster John Zogby reviewed the difficulties President Barack Obama faces in attracting young voters in the 2012 election. He noted that Obama, who received the support of young people in record numbers in 2008, is having trouble with the 18-29 year old constituency this year. He said that young people, who he characterized as “America’s first global citizens,” comprised 19 percent of the total vote last time, and that in 2008 they were “filled with hope and optimism.”

He noted that this year a subset of this group, which he referred to as CEMGA – College Educated Not Going Anywhere – because of the recession, don’t trust anyone. Zogby said his poll indicated that at the present time, there is a small group of young people  — 10 percent – who say they may vote for Gary Johnson, a libertarian.

Zogby said also that he found a growing sense of libertarianism among young people, as well as “a sense of distrust about the government, the debt, the leadership.”

Michelle Obama wowed the crowd last night at the DNC, just as Ann Romney did last week at the RNC.  Everyone loves the First Lady and potential First Lady – and rightfully so. Both are attractive, intelligent, and dynamic speakers who appear to love their husbands and their children. Both value education and the American Dream, and of course, support their husband’s competing visions for this country.

It’s a relatively new phenomenon to use the candidates’ wives as character witnesses, and while both these women are impressive, let’s remember that it’s not really news when Mrs. Obama asserts that “we can trust” her husband, or Mrs. Romney tells us her husband “will not fail.” Both these women are tremendous assets to their spouses, but it’s important to keep in mind that we’re not electing them to run the country. 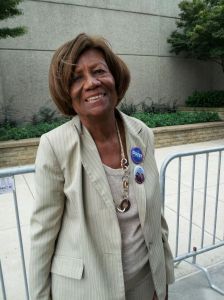 Yesterday, I met Hazel Dukes, the president of the New York NAACP. Formerly of Roslyn, the 80-year-old activist said she’s “too busy to get old.” She’s been traveling to Philadelphia and Pittsburgh in an effort to help those without drivers’ licenses, comply with new requirements that they need official identification to vote. “I’ve met people who are 96-years-old, are registered voters and have voted in every election; they don’t understand why they need identification now. But we take them by the hand, and help them get what they need.”

On the other hand, the Charlotte Observer reported that The Voter Integrity Project, a North Carolina group focused on cleaning up voter fraud, presented the North Carolina Board of Elections last week with a list of 30,000 names of dead people statewide who are still registered to vote. The group, which calls itself non-partisan, supports requiring photo ID to vote, which Republicans typically support and Democrats typically oppose. Charlotte Observer 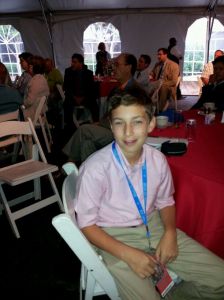 The youngest person at the Democratic Convention floor is Joseph Block of Westchester. He’s just 12-years-old and a seventh grader at SAR Academy in Riverdale, NY. He’s serving as a page at the convention. His responsibilities include “running around the hall,” and helping to distribute information to the delegates. His father, Herb, a DNC volunteer, said, “It’s a good job for kids.” Herb was a Congressional page during the summer of 1982, so Joseph is following in his father’s footsteps.

Joseph said he got interested in politics when he was seven years old, and this is his second Presidential Convention. He attended the DNC in 2008 when Barack Obama was nominated for the first time. “I get to hear great people speaking about our country,” he told me. I get to see how things work behind the scenes, and it helps me understand more about politics and government. It’s cool.”

Not surprising, social studies is his favorite subject. “I can’t wait till social studies,” he said. Joseph said he likes learning activities, rather than textbooks, and thinks good teachers “care” about their students. “They’re not just doing it for a job; they like teaching, educating kids.”

In regard to politics, he admitted that his friends are “not into it” and are more interested in sports. Joseph said he doesn’t aspire to be a politician because you get “a lot of people criticizing you, and you have a really tough job” but he might want to work behind the scenes.

Joseph will be campaigning for President Obama this year. He plans to give out flyers, signs, and knock on doors. He said if he had the opportunity to speak to the President, he would say: “You have a really tough job. You’re doing good.”

He estimates that about 70 percent of his classmates support Gov. Romney this year, reflecting their parents’ views. He said that in his school’s mock election in 2008, Obama lost by 18 votes out of 700.

What We Can Teach Our Kids About the Conventions 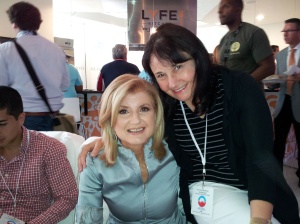 After five days at the RNC in Tampa, I arrived in Charlotte yesterday to a city rollicking with DNC festivities and tumult. A street fair appeared to strain the city’s security forces as kids with painted faces and their parents filled the streets, along with delegates, guests, and media. I took refuge in the Huffington Post Oasis, where Arianna Huffington greeted guests who were treated to healthy lunch fare, massages, and facials.

The convention begins today with Michele Obama as the headliner. Bill Clinton is the keynote speaker on Wednesday, and President Obama addresses supporters in the nearly 74,000 seats in the outdoor Bank of America stadium on Thursday night. Both parties script their conventions nowadays, and some pundits, like NBC’s Tom Brokaw, have even suggested that the one hour the networks devote to coverage each night is too much. That’s really a shame.

I fell in love with politics as a kid when I first heard the soaring cadence of John F. Kennedy’s acceptance speech when he was nominated for President in 1960. I became a political junkie right then and there. I remember watching conventions when the broadcast networks provided gavel-to-gavel coverage of floor fights, platform debates, and even walkouts on the convention floor — but those days are long over.

More of a shame is the endless 24/7 media spin – telling us what we saw and what to think – ad nauseum – and there’s blame to go around on both the right and the left. In Tampa, I watched the convention each night in its entirety from the convention hall, and I came to the conclusion that I don’t need an intermediary telling me what to think – and either does anyone else. Perhaps we should all try watching C-Span.

And what about our kids? What can they learn from the conventions and the political process?

They can learn that our two-party system is part of our government’s system of checks and balances. It’s a good thing, and prevents excesses of power.

We should teach them how to observe, fact-check, form their own opinions – and express them fluently.

We ought to stop talking about religion in politics. There’s still way too much interest in a candidate’s theology in a nation that prohibits religious tests. I remember being shocked that Kennedy’s religion was an issue in 1960. After all, half the kids in my public school were Catholic, and I had no idea all the previous presidents had been Protestant. If we stop talking about it, it will cease to be important. 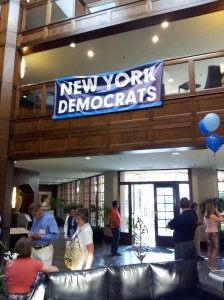 We should impress upon our kids that they can – and should — get involved. I was once part of a group of students that Vice President Hubert Humphrey addressed. He said, “If you think politics is dirty, get in there with your bar of political Ivory soap, and clean it up.” It was a tall order then, and it’s more so now. But it’s not impossible. Informed participation is the essence of democracy, and we ought to encourage our best and brightest to go into public service.