7 Tips for a Safe Halloween 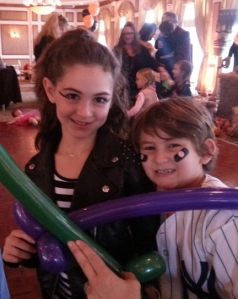 Last year, Halloween festivities were swept away on Long Island in the wake of Hurricane Sandy. It was difficult to celebrate with the massive devastation, loss of power, and overall misery engendered by this destructive superstorm.  But it looks like Halloween is back in force in 2013. Here’s a blog I wrote about how to keep your kids safe during Halloween. It appeared in Huffington Post on October 23, 2012 – before Sandy!

There’s a nip in the air and pumpkins are everywhere: In patches, on porches, in stores and in schools. It’s hard to ignore the signals that Halloween is fast approaching.

Almost every store has aisles of costumes and candy. Elementary schools plan Halloween parades and high schools organize Safe Halloween festivities for pre-school and elementary school children. But I can’t help think that Halloween is not what it used to be, when armies of little kids combed the streets collecting goody bags from moms who had lovingly assembled them.

That was long before there were objections to Halloween on the grounds that as a religious holiday it shouldn’t be observed in public schools. A Seattle elementary school recently banned Halloween costumes on the grounds that the holiday interferes with learning. It was long before we knew sweet treats were taboo — and even dangerous for those with certain food allergies. It was long before deranged people inserted razor blades into candy and sexual predators prowled the streets. And it was long before the craze of candy-flavored tobacco in brightly colored packages. Cigarillos, cigars and such smokeless tobacco products as chew, snuff and dissolvable tobacco — considered by many the first step to tobacco addiction — compete with Halloween candy for shelf space in convenience stores.

As I recall, we got real about Halloween when schools began recommending that parents bring to school all of the candy their children collected to be X-rayed. When that happened, I thought for sure he holiday was doomed.

But it’s made a great resurgence in recent years. People now adorn their homes with Halloween lights and blow-up pumpkins, witches and scarecrows. It’s a bigger business than ever before.

And yet, Halloween has changed.

First, there are parents who object to Halloween celebrations being held in public schools. With children coming from so many religious and ethnic backgrounds, parents are opposed to celebrating holidays that are not part of their tradition.

On the other hand, it’s probably a good thing that much of the Halloween observance has moved off the streets and into the schools. It’s a lot safer. Every year it seems we get fewer and fewer youngsters trick or treating at our door.

Parents have to decide for themselves if and how their children celebrate Halloween. What do you think?

Here are some tips for a safe Halloween:

• If your child has a food issue, make sure you discuss it with the teacher and school nurse ahead of time.

• If you have an objection to a Halloween celebration on religious grounds, make sure you let your principal and teacher know about it well in advance of the holiday.

• Even if you take your children to a safe Halloween sponsored by your local high school, watch them carefully. It may seem like a very safe environment, but keep in mind that the school gym is full of strangers.

• It’s best to accompany your children if you allow them to trick or treat, including for UNICEF. And of course, discard any treats that are not pre-packaged or look like they have been tampered with.

• Honestly, it’s just a bad idea nowadays for children to go door to door — especially in the dark — to strangers’ homes.

• If you do allow your teenagers to go out, they should go to people they know — and in a group. Make sure they have cell phones with them and that you know their route. You should also stress the importance of obeying laws, respecting private property and not engaging in pranks or vandalism.

• Better yet, encourage your teens to volunteer at a Safe Halloween event at their school.