Memo to Anthony Weiner: The “G” Word is a Blessing, Not a Curse 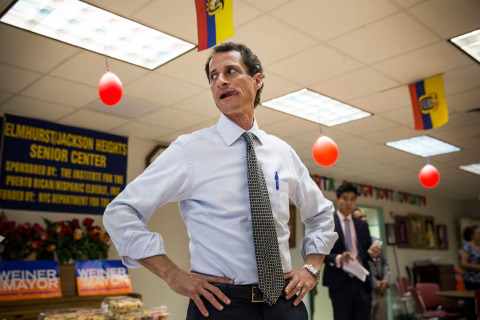 “What are you going to do about it, grandpa?”
— Candidate for NYC mayor Anthony Weiner to his 69-year-old opponent George McDonald at an AARP-Univision forum, according to the New York Post.
Read more: http://swampland.time.com/2013/08/06/anthony-weiner-calls-opponent-grandpa-at-aarp-event/#ixzz2bNyBkg69

When Anthony Weiner referred to George McDonald, his 69-year-old rival, as “Grandpa” in an AARP Mayoral Forum this week, it set off a firestorm.  Beth Finkel, director of AARP in New York State, called the remark, “unfortunate,” saying that “a person’s age should not be a factor in politics, or anything else.”

As someone who does not vote in New York City, I have no dog in this fight. But as a grandparent, I have a big problem with this entire story line.

To begin with, ageism is nasty — just as racism, sexism, and all of the other “isms” demean us as human beings. It should have no place in politics, in the workplace, or in our lives. Our society still has a lot to learn from other cultures, which venerate the wisdom of age. When are we going to stop being so shallow?

In any case, 69 is not all that old nowadays, when people are living well into their eighties and nineties. Ronald Reagan was 69 when he was elected president in 1980; Queen Elizabeth is going strong at 87. And should Hillary Clinton run for president in 2016, she would be 69.

When did “Grandpa” become a pejorative word?  As a young child, my Grandpa was the love of my life. He was a consistent nurturing and attentive companion to my brother and me during our weekly visits to my grandparents’ apartment.  Although he did not have the benefit of higher education himself, he was a strong believer in life-long learning. He had us learn the capitals of every state in the U.S., all of the presidents and vice presidents, and the most difficult spelling words.

He would then test us on the assigned topics the following week, emulating the quiz shows of that era. For every correct answer, he would reward us with pocket change. He would take us to the local soda fountain and order cherry sodas for us.  He died when I was 12 years old, leaving me bereft — but I keep him alive by remembering. The taste of cherry soda still brings back sweet memories of my grandpa.

Today, grandparents can be 42 or 92. It doesn’t necessarily mean you are “old” if you have a grandchild. It depends on what age you had your children, and then when your kids embark on childbearing.

I imagine that many – if not most — children and grandchildren are appreciative of the unconditional love, help and support they receive from grandparents.  And if the grandparents are not young at heart, healthy, strong, and able to provide assistance, shouldn’t they still be respected, loved, and appreciated? I would hope so.

You have only to listen to grandparents to know that most of them live for their grandchildren, and relish them in a way they could not enjoy their own children when they were small. My three grandchildren enrich my life with their smiles, their insights, and their love. What a joy it is to see the world anew through their eyes!

I sincerely hope that Anthony Weiner becomes a grandpa one day, and learns that far from being an insult, being a grandparent is the ultimate reward and honor.

The Living Memories Project, by Meryl Ain and her co-authors, will be published this winter by Little Miami Publishing Company.