← How to Prevent Summer Learning Loss
School Budget Notes: Implications for NY and Beyond → 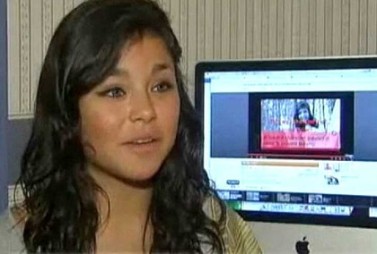 Jessic Barba on the Today Show

The video, which was created in fulfillment of a class assignment on persuasive speech, depicted a fictional teenager who is bullied in school and online and eventually commits suicide.When a parent of another student complained to Suffolk County police, Jessica was suspended. But the school district later reversed its rush to judgment. She was reinstated after missing school for five days, and the suspension was expunged from her record. Police said no crime had been committed.

In the video, Jessica portrays a 12-year-old who becomes despondent and depressed after being systematically bullied. Both the title of the video and statements at the start and finish clearly indicate that the scenario is fictional. The video ends with the girl running into her bedroom and slamming the door; a caption indicates that she committed suicide.

“I chose bullying because it is a problem that I feel strongly about,” Jessica told Newsday. “I believe that bullying has to end.”

This incident all too clearly demonstrates that all of the policies, practices and laws in the world are not going to work unless school administrators use common sense and caring to address issues. Indeed, knee-jerk reactions as exemplified by Longwood School District officials, demonstrate the dangerous pitfalls inherent in zero-tolerance policies and anti-bullying legislation.

Enforcement has to be free of politics, prejudicial judgments, and inadequate research and information. In this case, officials were more interested in protecting the reputation of their district than in the welfare of their student. Jessica should have been rewarded for her ingenuity and creativity instead of being punished. There is simply no substitute for fairness. Hastily meting out consequences to satisfy a public relations problem hurts everyone and compromises the integrity of the entire school system.

The Dignity for All Students Act will take effect in New York State on July 1. Let’s hope that school district officials will enforce this with their hearts and heads, keeping the welfare of students as their number one priority. New York joins 11 other states that have already passed similar legislation: California, Connecticut, Iowa, Maine, Maryland, Massachusetts, Minnesota, New Jersey, Vermont, Washington and Wisconsin.

The Dignity Act protects against all forms of harassment, especially those based on race, color, weight, national origin, ethnicity, religion, disability, sexual orientation, gender or sex.  The legislation amends state education law to require schools to incorporate diversity and discrimination awareness and sensitivity training into lessons on civility, citizenship and character education. In addition, schools are required to develop effective responses to harassment and bullying, and to mplement strategies to prevent these behaviors.

It’s important that this and all anti-bullying legislation be implemented in a way that ensures dignity and justice for all students!

2 Comments on “Bullying Can’t Be Solved with More Bullying”